The MR2 (sometimes referred to as Frankentwo due to its Frankenstein esque appearance) is a SW20 Rev 3 model, and arrived three days after the first MR2 had an unfortunate, unscheduled meeting with a tree.

It was missing most of the interior, and what remained was rather tasteless and battered, it had no alternator, an exhaust that made Matt’s MR2 trumpet system sound quiet, and a door with as much rot as the Dodge.

What followed over the next few months was an extensive rebuild using the old car as a donor, making my ‘new’ car feel very much like the ‘old’. It’s very much a work in progress, but is one of Lawrie’s all time great cars, which he never fails to take out for a drive.

As of Autumn 2019 the MR2 is in hibernation for the wintery season ahead where a few of the outstanding issues that have occured will be addressed. Keep an eye on What’s Broken Now episodes for updates. 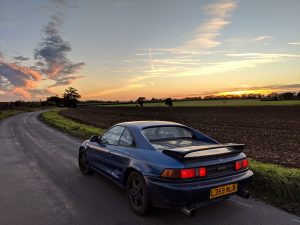 Come and see what the latest news about your favourite vehicle or what the team have been up to recently on our very own YouTube Channel!

Like to chat nonesense about cars, trucks, trains or tractors?

If you want to support LMM directly then consider becomming a Patreon supporter and gain access to custom content!

We often do a spot of gaming and chatting with the LMM team!